So I find myself stranded at the San Francisco Airport with four hours to kill until my flight. Wait, perhaps I should rewind a bit. It’s my first time on the West Coast and unfortunately it was a short trip. Flew in yesterday to San Jose, had an job interview this morning and took the train up to San Fran for my departure flight out of SFO. Not my ideal first trip to Cali, but not bad either. In my imagination (as a younger single guy) there were more waves and blondes. Well perhaps I should’ve spent more time yesterday prepping for the interview but I didn’t feel like over stressing it. The way I saw it, in case I did get an offer, I better be damn sure to see a bit of the town before making any final decisions. Of course by checking out the area I mean checking out the local chess scene.

If you’re not already aware of it, then I should explain that California has a legendary chess culture and that’s especially true of the Bay area. Since picking up chess as a hobby six or so years ago I am always sure to visit the hot chess spots anytime I take a trip to a new city. I tell my non-chess friends that it’s like having a universal brotherhood where you are quickly accepted, albeit to varying degrees (don’t get me started about Montreal chess players). So far some of the notable trips I have been on include the Marshall club in NYC, Cafe Pi in Montreal, St. Pete Chess Club in Florida, and to Pepperoni’s cafe in New Orleans. All had their different styles and characters, although I must give credit to the New Orleans chess club for showing me a great time, even going as far as taking me with them to their after chess party spots for late night bughouse.  Visiting the local chess club adds a whole new dimension to your vacation and if you get the chance I highly recommend it.

Well on this trip I finished up a few beers at happy hour on Santana Row and took a city bus over to the Kolty chess club near San Jose. They meet in a church but have no religious affiliation. When I got in, fully expecting to just play some pick-up blitz games, I realized that they had round 1 of an all out classical time controls tourney going on (they will go on to play one round a week every Thursday for 5 rounds). They had a strong showing and around 40 players in the tourney as well as other members hanging around to kibitz. I introduced myself to the arbiter and he volunteered to pair me with any odd men out, free of charge. I told him I came to play blitz but that he could count on me. Truth be told it’s been some months since I played a longer rated game and a hell of a lot longer since I played one outside Tallahassee and my usual opponents. That plus the beers had me thinking maybe I should just watch, but the minute those doubts start creeping in I just remind myself it’s only a game, a game that necessarily measures your manhood…haha I’m only partially serious. I figured, no matter how well or poorly I play my rating will still be relatively low at the end of the day.

Well the round started and a tall gentlemen came up to me introduced himself as Jim and informed me we would be playing. I went over to see the pairings and sure enough there I was with my new buddy Jim. I had the White pieces:

I opted for the English. I have only played this opening in tournament play a handful of times in the past year and a half, but I have had good results with it, notably against stronger opposition. Already, so early in the game, Black’s moves seemed new to me. It was obvious he was preparing for the d5 push and I certainly don’t profess to know the actual current theory on this matter however this plan didn’t seem quite right. I seriously considered pushing d4 but instead decided to take a chance and played

I was happy to see d5 because it would mean a more exciting game. I fully expected e5 or c5 which would lock down the d4 square for Black but likely lead to a static, closed, and duller position. Having said that, had I been black I would’ve gone that route.

A serious concession to have to make in my opinion, White has the advantage in space and development. Not only are Black’s queenside pieces stepping all over each other, the Black king is not easily castling. 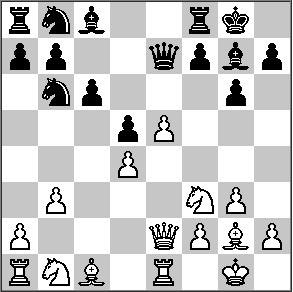 And here I quickly set a small trap that I had been eyeing earlier. Under normal circumstances I do not believe my opponent would’ve missed the tactic, however upon his last move I made sure to look at the knight and nod my head as if to say “okay now I have to make sure he has no squares to hop to” then I quickly pushed 12. b3. Yes, the move does serve to restrict the knight and so it’s a move to consider regardless, but as I once read in an interview with Anand, it is okay to set obvious traps as long as they don’t weaken your position or game plan. Well whether it be due to my quick and natural seeming play or to the simple fact that Black was still attempting to catch up in development, my opponent missed the threat and played

Black goes for a pawn break but i’m not convinced it was the best option as it now leaves an isolated center pawn for White to attack. Black is down significant material after being behind in development more than usual, along with a slightly less favorable position. When small problems pile up it get’s very hard to make the correct decisions as it becomes a game of choosing among lesser evils. In a sense Black has to mix it up and try something since, with correct play, it is certainly already lost. Luckily he is playing me and he can pretty much count on anything except “correct” treatment of the position. 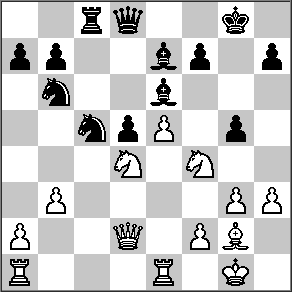 This is going too far and only serves to waste a tempo as I wanted to capture the e6 bishop with the knight on my next move anyway. I had expected Bg5 or pretty much any other move. On the other hand it is possible he believed he would be able to capture back with the f pawn.

I had expected my opponent to play for this skewer along the a5-e1 diagonal awhile earlier perhaps by pushing a5 at some point. So far the game was going in my favor but I had been struggling with slowing down throughout the game. I had only used up 7 minutes. Now to be fair I hadn’t left the table and had been using every second of his to think as well, so it would be fair to say I was keeping a G/25 pace. As I mentioned it had been awhile since my last rated game and since then there had been no calm analysis, no studying, no games that weren’t blitz. So like a jackass I had been playing too quickly, and I could feel the nerves taking over. The last thing I wanted to do was spoil a win so it was around this point in the game when i went for a walk to the water fountain and to glance at other games. I figured I could get my head right and in the meantime let my opponent contemplate my sudden new change in pace.  This was a key position because it was here that I decided to give back the exchange for what I considered a cleanly winning game plan. I took a long turn now to calculate the return sacrifice then played

I was sure to play my 26th move instantly to emphasize to my opponent that I had seen the skewer and only allowed it because I felt it furthered my advantage. At this point I had fully been preparing to capture the b6 knight however I suddenly changed my mind deciding I’d rather capture the bishop. The simple justification was that my opponent would be left with weak dark squares around his king and I would have the sole bishop. I also must admit that I failed to calculate the text response.

Yep that’s a good reply. The good news was I still had an edge, just not as much as I wanted anymore.

Here’s where it gets wacky. Yes I am attacking a loose knight, I just won another pawn and managed to defend my own pawn simultaneously thanks to the threatening knight fork should the queen move off the diagonal (if you haven’t noticed it on e7), however I also just left the back rank and my king open to a scary looking attack. A sample continuation is 29…Qe1+ 30. Kh2 Rc1 31. g4 Qg1+ 32. Kg3 Rc3 33. Ne3 Nf4 and it looks like close to curtains for my king. Even if I could somehow run with the king why would I opt to give my opponent any such counter play? Well it’s because A) I saw an alternate defense, and B) I’m still threatening his knight plus a little extra something sneaky so I felt it was time to go big or go home.

Well at first glance it looks like I’m holding on by a thread putting myself in pins and retreating my knight. Not only that but my opponent’s last move appears to be a good one as it moves the knight out of attack and threatens to come to e4 when it would be impossible to defend the f2 pawn and the mating of my king. It all looks good except for the fact that I can now play 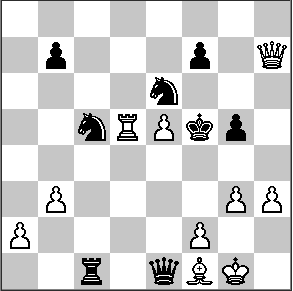 A short but fun game, my opponent was a very cool guy and we did a little post-mortem analysis including the above. We both got to get in our blows and the ending saw both monarchs under attack. I just happened to get a little lucky as I’m sure I would’ve blown it any other day.

The next time you travel to another city make sure to hit up the local chess club or coffeehouse. You won’t regret it. -b