Hey guys (and gals…should we eventually add one to our stereotypically male membership), Ben here. At our last Tallahassee Chess Club meeting I playfully ribbed Steve for prioritizing his job and other life responsibilities ahead of keeping this blog up to date by the minute. Then he told me to step up and contribute. Be careful what you wish for folks, lesson learned. In all truth I’m pumped to get the opportunity to bring something to the table whenever I can and I hope that you all find some interest in my mostly chess related ramblings too.

Now it just so happened that this past Saturday I was at Black Dog Cafe on Lake Ella (because I forgot to help out at the Scholastic Tourney, sorry Steve my loss) with the rest my fellow Tallahassee coffee house players.  As usual Eric and I were combining some very dubious blitz play with some very no holds bar trash-talk, all in good humor. So if you feel like refuting speculative sacrifices whilst facing a barrage of schoolyard insults come on down. DISCLAIMER: Honestly speaking do not be scared off as I am perhaps the only one partaking in such adolescent behaviour, in fact I believe we have one of the most welcoming clubs in town. As it happened one of Eric’s favorite prods when and if he loses, especially when he runs low on time and flags, is that I won by “boring him to death” hence the title of my post. Now as we are playing wild blitz game after wild blitz game I can assure you all this is far from the case, which makes the joke even funnier, but it did get me thinking about when and if I had ever done that…The answer is yes, once, and I’d like to present the game to you.

There are games I somewhat recall and games I will always remember and this is one I was and am particularly proud of. It was at the World Open in Philly back in 2009. Don’t let the name fool you I played in the U1600 section. I did a quick search to find that my rating was 1515 and it was my 8th ever event, my first tournament being in 2007 at the Miami Open. I went 6/9, losing two of my three losses quite unforced and pathetically so I can tell you my play was as inconsistent as ever. In my mind this is every chessplayer’s worst enemy, we can all find brilliant moves but to avoid bad ones move after move and game after game is the true mark of a strong player.

Here I include a link to the game that you can open up in another window and play through along with my annotations (pardon its’ ridiculous length):

Please keep in mind that the following game was played by a couple of 1500s and I’m sure it is far from perfect. I am also sure that running an engine on the moves will produce a forest of better alternative moves but, as will always be the rule for most if not all of my past and future analysis, I choose not to consult the engine, at least not before mulling it over myself. I also do not currently own a Fritz or Houdini, etc so I usually harass Steve into consulting the silicone chess gods for me. Giddy up, here she goes!

The Torre, admittedly my opening knowledge is like a shallow puddle, lacking breadth and depth, so you could say that Phase 1 of “Operation Boredom” begins with my choice of the opening. I simply want something non-committal, flexible, solid and closed.

I actually quite like Black’s setup as my opponent seems properly positioned to open up the game. Having said this I also like my own position for the reasons I mentioned earlier. One aspect of my early chess successes that I wish to get back to was the ability to play opossum in the early middle game, prompting my opponent to overextend and/or incorrectly commit his pawns. Thus begins Phase 2. 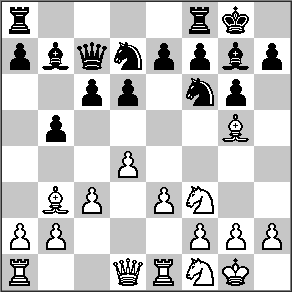 What may seem like indecisive piece shuffling has actually been a conscious effort to entice Black’s  pawns to be pushed forward, especially on the queenside. Specifically I recall playing this Kf1 followed by Qe2 idea with the point to provoke Black’s a5 and Ba6. Similarly I was happy to leave my bishop on b3 as long as possible until the c4 push which must have also been played in dual response to Rc1 (as well as closing in the Bishop). 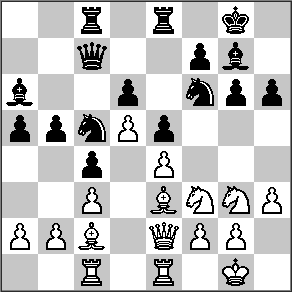 After semi-tying up his bad bishop and king to the defense of h6 I finally open the game a little, but only after I feel completely ready and safe, and on my own terms. This is key. Perhaps it seems that Black could’ve opened the game himself earlier whenever he chose but things were never as easy as they might appear on first glance. Over the board, it was my belief that I had successfully, either directly or indirectly, discouraged this opening of the game from happening. My beliefs where reinforced when after the game my opponent admitted to me that he felt I had repeatedly kept him from doing so.

Phase 2 complete (excuse my cheesiness but I think I will stick with this “Phase” whatever talk), my opponent’s pawns look sufficiently vulnerable and so only then, when I feel like I am only playing for two results, I begin to trade off the heavy pieces.

This move has long time been in preparation which made it all the more satisfying to get to play.

This mark’s the end of the 3rd act of Boredom. I will tell you now I most certainly wanted my opponent to think I was steering us to a quiet draw devoid of pieces and no access points for either kings.

Probably a crucial mistake, now I have almost everything I need for a win out of the position and everything has gone even better than planned. Understandably my opponent perhaps rationalized allowing the capture of the knight on general principles such as his having the only bishop pair in the endgame or obtaining a pawn majority on the queenside with thoughts to push b4 however the reality of the situation is that with my two knights who have seemingly been bumbling about I can defend the b4 push by keeping pressure on c4 and simultaneoulsy my knights in cooperation with each other and my king can move to resolve the kingside. I still enjoy seeing the next few moves as the knights seem like intertwining cobras in my imagination.

The final and critical mistake, like taking a sledgehammer to the keystone in Black’s arch. His position is now completely lost. Perhaps you have already seen the crux of my grand scheme. As far back as 19. Kf1 and in some sense even further the idea, which became set in stone on move 36. Ba6, has been to eat all of Black’s queenside pawns without giving anything in return. Now that Black’s lightsquare bishop has left the board, and both his king and knight are far out of play, how will the a4-b5-c4 pawn chain be defended?

Finally it begins to dawn on Black, just how helpless his circumstances are. The rest is as they say “a matter of technique”.

Seemingly a blunder but probably a failed last ditch attempt at tactics brought on by time pressure and the hopelessness of the situation. Although I haven’t yet mentioned time, we played with the classical controls of 2hrs followed by an additional hour after move 40 and 15 minutes after move 60, not to mention the increment of 30 seconds I believe. So as you can see we made all of the time controls and I tell you we used all of our time. Indeed I made sure to take all my time which is of course another key element, perhaps most important, when attempting to bore your opponent to death. I gotta say I really enjoyed playing these last moves that follow, the whole king walk to h5, Bishop maneuver to Bg6, and Knight jumps to the eventual d3 are perhaps the most harmonious moves I have ever made. The resulting position in which Black resigns is the position I will always recall when I think of the term zugzwang (perhaps one could even say Black has been in zugzwang for some time now).

There is no stopping my passed pawns without further loss of material and so Black resigns.

6 thoughts on “Bore Your Opponent Til Resignation!”