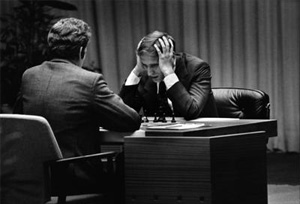 If anyone wants to get together and watch it as a group, let me know and I’ll see if I can set something up. The documentary is 90 minutes long. June 6th is a Monday. I do not know the time it will air, but I’m guessing it will be during primetime (sometime between 7:00 PM and 9:00 PM).

Trailer for Bobby Fischer Against the World:

Director speaking about Bobby Fischer Against The World: